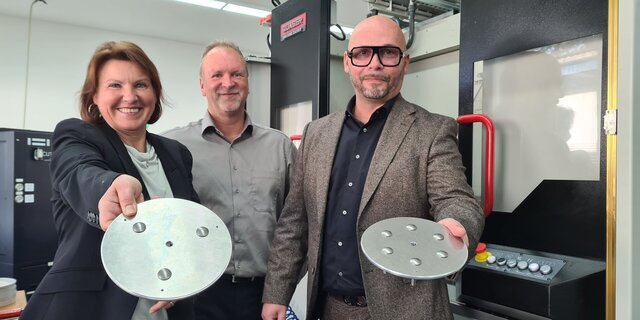 They build antennas for buses, trains and trams all over the world: The products of the antenna manufacturer Antonics from Velten can be found in trains in Boston as well as in buses in New York and in many German vehicles, for example in the BVG and S-Bahn in Berlin. The antennas enable the transmission of information such as the classic train radio of the train driver as well as the WLAN for the end-users, the transmission of information for the information displays or the collection of data on passenger numbers as well as the condition of the brakes. "It all started with analog radio, then we also developed digital radio solutions on new frequencies and with larger bandwidths. No we submit at least one new patent every year and are the technology leader in our core business. Our competitors are usually two or three years behind with their products,” explains René Roeder, CTO at Antonics, to Ines Hübner, Mayor of Velten, during her recent visit. “However, our production is that of a classic metal precision engineering builder."

The two Antonics managing directors Knut Feige and René Roeder started in 2007 with two employees and a manual lathe. Today, the number of employees in the family business has grown to 27 - and counting. The order books are well filled. The railway industry is a sector of the future, even though it is highly competitive, so the managing directors. As a relatively new company, Antonics has already made its way in the top league. Around 30,000 railway antennas now leave Velten every year. And so the machine park has grown to an impressive size today. The newly built production and storage hall is is almost self-sufficient thanks to solar power. It includes several large, fully and partially automated milling and turning machines. But manual work is still in demand: filigree work is still being done in cable assembly, for example. This requires patience and good fine motor skills. “Velten is the ideal location for us because we are close to our clients. There are around 200 rail transport companies in and around Berlin,” explains Roeder. An expension of the production facilities is planned in the future. Ines Hübner: "I am very proud that such an innovative and future-oriented company produces in our city. It's just impressive to see how dynamically but healthy Antonics has grown over the past few years. Seven years ago I was here for the first time and could have only imagined such a developement. It's also a nice feeling to know that modern technology from Velten is in Berlin's trams and trains. I will certainly think of that the next time I visit our capital.”